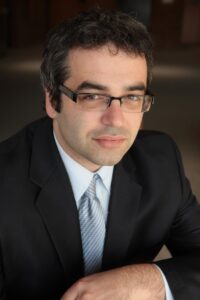 Professor Schwarcz will discuss the ongoing controversy in the United States surrounding the availability of business interruption insurance in connection with the COVID-19 Pandemic. His talk will review the key coverage issues that are currently being litigated in the United States, the size and scale of this litigation, and its likely resolution in the months and years to come. Professor Schwarcz will also discuss various state and federal legislative proposals designed to address the availability of business interruption coverage for future pandemics and, in some cases, to retroactively mandate such coverage for the current pandemic.

Daniel Schwarcz is the Fredrikson & Byron Professor of Law at the University of Minnesota Law School. He is an award-winning teacher and scholar. His research focuses on a broad range of issues in insurance law and regulation, spanning systemic risk, regulatory federalism, consumer protection, employer-sponsored health insurance, and insurance coverage litigation. In 2017, the American Law Institute awarded Schwarcz its highly selective Young Scholars Medal, which recognizes the scholarship of one or two outstanding early-career law professors whose work has the potential to influence improvements in the law. He has also been awarded the Liberty Mutual Prize, which is given annually for the most outstanding article on property and casualty insurance law.

Schwarcz’s scholarship has been published in a wide range of leading law reviews and journals, such as the University of Chicago Law Review, Virginia Law Review, and the Journal of Empirical Legal Studies. He is also a co-author of the leading insurance law casebook in the country, Insurance Law and Regulation (7th edition), which has been used as the principal text in courses on insurance law in more than 100 American law schools. Media outlets such as the New York Times, Wall Street Journal, and National Public Radio have covered Schwarcz’s scholarship. He regularly testifies to U.S. Congressional committees on insurance matters, and he has served as an expert witness in a wide range of insurance disputes. From 2007 to 2014, he served as a consumer representative at the National Association of Insurance Commissioners.

Schwarcz teaches courses on contract law, insurance law, the regulation of financial institutions, commercial law, health care regulation and finance, and judicial opinion writing. He has twice received teaching awards at the Law School, in 2008 and 2012.

Booking for this event has now closed.

Presentation downloads are only available to logged-in members of BILA.